Browse: Home / Android, Guides and tutorials / Android and I: A Love Story

Android and I: A Love Story

I had heard about Android now and then since late 2007, but it didn’t really catch my attention until the spring of 2008 when I read an extensive article in Wired Magazine about Android: Google’s upcoming open-source mobile platform. And it won my heart. Android really speaks to my inner geek. The name and logo alone made the tech nerd part of me all warm and fuzzy. I daily devoured news about the upcoming OS during the four months that preceded its release in October 2008, with the first ever mobile running Android: the HTC Dream. Following the development closely was intriguing and something I’m glad I was a part of (remember the breathy “Vader” video, anyone?).

The fresh mentality of Android appealed to me: from the very beginning I loved the idea and philosophy of the platform. How it is designed to be open, intuitive, customizable, unobtrusive, fun to use, clever, easy and fast. Perhaps more importantly, Android is also open-source, presents a different way of thinking and provides seamless integration of both Internet and GPS. The platform can be configured to power everything from washing machines, to cars and alarm clocks – basically any piece of electronic equipment. To encourage applications being written for Android, Google held a developer’s challenge. I remember reading about the various candidates, and when the Top 50 list finally was announced, some of the software almost felt a bit science-fiction – especially when looking at the handsets I had a few years back. The huge desktop and the official videos of Quake running at full speed on Android didn’t lower my interest. I even enjoyed the seemingly modest and humble icons: stylish and sparse, the landscape wallpapers – and the clean, uncluttered design of the UI. Apparently, Google spent years developing the perfect Android font. All in all, it almost seemed too good to be true. 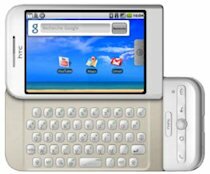 But when the actual first device after a long wait was introduced to the world, I must admit it was somewhat of an anti-climax. I don’t know why, but for some reason I had expected an über-phone with great specifications: a large high-resolution screen capable of showing millions of colors, at least 4GB of internal memory, 256MB of RAM, a nice 5MP camera et cetera. Well, the dream of the HTC Dream turned out to be just a dream. To mention a few weaknesses, it lacked some basic Bluetooth functionalities, the screen could only show 65K colors, the mediocre 3.2MP camera couldn’t capture video and the phone didn’t even have a 3.5mm headphone jack or a radio. And the OS itself apparently showed signs of being an initial release, like not having an on-screen keyboard. Still there was something magical about Android, and even the HTC Dream.

At the big press launch for the Dream (or the T-Mobile G1 as it’s called in the US), Google’s co-founder Sergey Brin gladly announced that he had arrived to the event on rollerblades, and later declared that the first application he wrote for Android was a program that measured how long his phone had been airborne whenever he’d thrown it up in the air. You just got to love that kind of informality and nerdy goofiness at a rather formal event (and then there’s Microsoft’s executive officer Steve Ballmer’s altogether different version of goofy: the scary, rabid bonkers), from someone whose net worth is estimated to almost 16 billion dollars.

Both a benefit and a drawback of Google’s platform is that it only runs software written in Java (there’s a workaround, but it’s unsupported). A drawback since it in theory should make the software slower than if Android had a native programming language like C (Symbian does, for example), a benefit since the cross-platform nature of Java makes it relatively easy to code for Android. How quick and convenient it is to write applications for Android is something that Google has underlined, and it is an integral part of the idea behind the OS. Ideally, the platform should however have been able to handle both Java and a native language, like Symbian and WinMo.

As usual, it will take a few years before the general public catches on, but Android will eventually have a great impact on the world of cellular phones. Of course, in many ways it already has. In fact, NVIDIA even expects Android surpassing Windows Mobile sales in 2012. That seems likely, and it’s especially impressive considering that WinMo has the advantage of having been around for nine years already. Speaking of NVIDIA, their upcoming Tegra chip truly seems eye-popping and they have luckily decided to let Android in on the action.

According to exceptionally well-informed Russian mobile journalist Eldar Murtazin over at Mobile-review.com (if the Lone Gunmen were solely into cell-phones, he could have been part of the crew), Google and associates are already working on Android 3.0. Apparently, he had the privilege to view closed demos of the OS at the Mobile World Congress in Barcelona recently. Eldar labeled Android 3.0 “fantastic”, while version 2 to him just seemed “pretty sad” (whatever that means – lost in the translation?). This is of course merely rumors, but Version 3 is roughly scheduled for a mid-2010 release. Even though I can’t wait to buy an Android device, I will try to stick it out until version 3 since it’s supposed to bring so many improvements (who am I kidding? – I will probably buy the first Android phone I can get my hands on!).

Steady rising Taiwan-based HTC already have two devices running Google’s platform (the Dream and Magic) in their product line and believe deeply in the OS, and are set to release even more Android phones in 2009. South Korean Samsung has confirmed that they will have three Android handsets revealed by the end of the year, and Motorola, Garmin, Huawei, Acera and LG are working to get on the bandwagon as well. Even Sony Ericsson is said to have an Android device on the way.

There are also many minor manufacturers making their own Android handsets (and netbooks), since the platform is open-source and free for anyone to use. A couple of years ago, there were a lot of talk in the press about that Google supposedly was developing their own phone: the “gPhone”, a “Google Phone”. Of course, Google eventually denied the false rumors, saying that instead of having just one phone (like Apple), they saw Android in due course running on hundreds of different handsets across the world. Google hasn’t even started fully promoting Android to the public yet, what we’ve seen so far is just a warm-up and I’m looking forward to what’s yet to come.

In early summer 2008, I emailed Google’s mild mannered Android introduction video to a couple of friends of mine, expressing my large enthusiasm and saying that Google now was one step closer to world domination and that Android eventually would have an enormous impact. There’s no doubt in my mind that Google’s platform sooner or later is going to be everywhere. This is only the beginning.