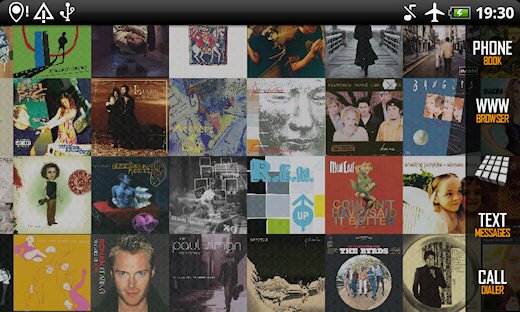 While most Android live wallpapers are all about the eye candy and wow-factor, Album Art takes an entirely different and more subtle approach: it collects the cover art for the albums in your music collection on the SD card and creates a wallpaper of them. The covers are stacked in a collage, and there are four different album sizes available ranging from tiny to large.

You can tweak Album Art Live Wallpaper to your liking with a couple of settings, and it’s pretty customizable. The order of the album art may be randomized, and there is an option to draw all album covers in grayscale. You can also make it periodically change the covers at a given time frame, which is a nice touch, but the refresh intervals are quick (between 1-30 seconds). Personally, I would like all album covers to be changed once every other hour, so the next time I pick up my device there’s a brand new album art background. Hopefully the developer will add more refresh rates later on. 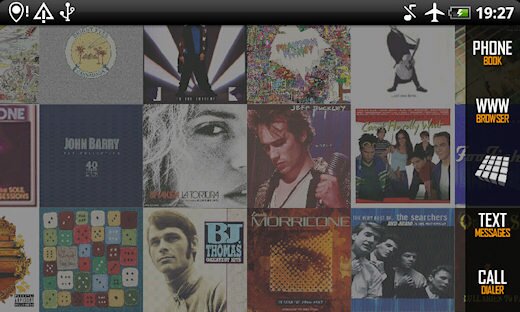 Luckily, there is an opacity option as well that will make pale text easier to read, since the live wallpaper basically would be unusable otherwise because of contrast issues. In my experience, the medium or light levels provide the best mix between look, contrast and visibility. Since the Album Art Live Wallpaper isn’t in your face and can be more or less static if you want it to, it’s battery friendly.

Some suggestions that would make an excellent live wallpaper even better: it would be nice if the wall of album covers was much wider, and adjusted its width to the number of homescreens. To be able to tap on a single album cover to replace it with another one would be a welcome addition as well.

Music has been a huge part of my life for 15 years now, and I’ve been writing and recording my own songs for 10 of them. I love the idea of having my favorite albums as a homescreen wallpaper, even though a couple of bad records usually manage to slip in there somehow, and album covers can truly be works of art. I definitely recommend all music fans to check out Album Art Live Wallpaper. There’s a demo version available in the Market as well that slaps the tag “demo” on each album cover if you want to try before you buy. A free alternative in the market is Living Music Wallpaper, but it unfortunately lags. If the music collection on your phone lacks album covers, here’s how you can get them automatically.