Hardware keyboards on handsets have been a priority for me personally, for obvious reasons such as quick and convenient text input, but also to aid gaming and emulation. Still, my last two devices, the HTC Hero and Desire, have both been all about the touchscreen. And thanks to great software keyboards like those on this list, I hardly ever miss having a hardware QWERTY these days. Here are the top on-screen keyboards Android currently has to offer.

Swype is likely the most loved, innovative, fun and revered input method for mobile devices since T9 dropped its magic on us in the 90s. The on-screen keyboard allows you to enter words by sliding your finger from letter to letter in a drawing motion, and you only lift your finger between words. Spaces are automatically inserted, and Swype uses error-correcting algorithms and a language model to predict words, so you can be pretty sloppy and still get the words you want. Not having to lift your finger supposedly makes Swype faster than other touchscreen input methods, but I mainly use it because Swype’s much more fun than a traditional QWERTY. There are some annoying quirks present, but I’m on version 1.6 and those may have been addressed in more recent releases.

Annoyingly and regrettably, Swype is still in closed beta on Android – even though it comes preloaded on several Android devices. I’d say being the main keyboard on very successful high-end Android phones by Samsung, and now also on the Galaxy Tab, indicate that your keyboard is out of beta and ready for prime-time, right, Swype? Release it in the Market, already, or announce that you’ll never going to do it if that’s the case. Luckily, you can still do a manual installation of Swype by following these instructions.

Of all the traditional on-screen QWERTY keyboards in the Android Market, SwiftKey is the most prominent. Every software keyboard aims to bring intuitive predications, spell corrections, word completions, and various other clever methods of helping you type more conveniently and accurately. In my opinion, SwiftKey does this best, alongside the HTC Keyboard below. A benefit with SwiftKey is its ability to handle two languages at once: it automatically recognizes which language you’re currently using, and adjusts the dictionary accordingly. Great if you’re bilingual. Another SwiftKey feature I think all of these keyboards ought to have, is the option to scan your text messages and learn your own unique words that way.

If you have an Android device by HTC, you definitely already rock one of the best on-screen keyboards there is. I’d say the HTC Keyboard, or HTC IME, is more or less on par with SwiftKey. They both have their strengths and weaknesses, and it’s mainly a matter of taste: what fits one person may not suit you. Even those who don’t have an HTC Android device can try this keyboard thanks to a port by the xda-developers, which includes various modifications and enhancements. HTC doesn’t seem to mind.

I’m actually not sure which keyboard came first: Swype or SlideIT, but since Swype is much more well-known, SlideIT sort of feels like a Swype rip-off. Both keyboards use the same sliding text-input method, and many users like SlideIT better than Swype. But foremost: SlideIT is actually available in the Market, unlike Swype. Here’s SlideIT on AppBrain. Update: Version 3.0 of SlideIT brought a bunch of nice improvements, and it’s quite good now. I emailed the developers a list of features I think they should incorporate, they sincerely thanked me and said that they hoped I would keep sending them suggestions. Hopefully the next SlideIT release will feature the additions I suggested. 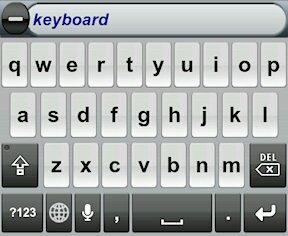 I personally see no reason to use Smart Keyboard Pro when SwiftKey is available for roughly the same price, but it’s a fairly popular traditional QWERTY keyboard in the Market. 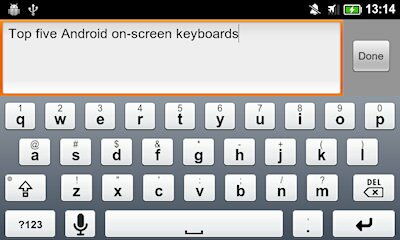 8pen was released earlier this week and it introduced a new gesture-based input system. However, unlike Swype and SlideIT, 8pen doesn’t rely on the classic, familiar QWERTY layout. Instead, it presents a circle surrounded by four sections with letters on each side. You start in the center and move your finger clockwise or counterclockwise through the sections to write the words you want. Some people like it, most people don’t, and I can frankly say I think it’s a horrible keyboard. Tried it for 20 minutes, and I’ll never use 8pen again. I dare the developer 3qubits to show a video of one single person typing really fast with this thing. 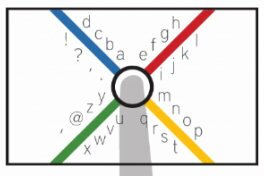 If you want to try something truly experimental, you should check out Dasher, which I’d like to file under the “what the frak?” category. Just look at it doing its wonderfully weird business in the screen shot below, like it was the most normal thing in the world. Definitely 10 points for originality, but as you might have guessed, it’s not that practical. 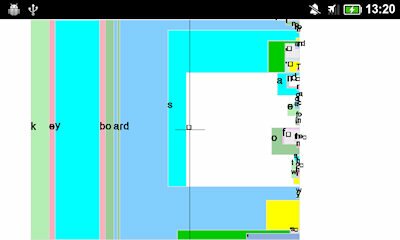 To keep an eye on

BlindType is another keyboard that wants to predict what you’re typing even if you’re a really sloppy typist, and in this case, also blind. The company was recently acquired by Google itself, so hopefully future versions of Android will feature an on-screen keyboard rocking BlindType’s technology.