The Difference Between Android and iPhone

This web comic from the top of today’s reddit Android section highlights the difference between Android and the iPhone’s iOS: one of the systems promotes openness, and the other has a “walled garden” with closed and restricted environments. It’s pretty hilarious.

British actor, author, comedian, movie director and general tech lover Stephen Fry said in a recent post on his website that many of his fellow-countrymen would “rather eat poo than to be seen dead” with an iPad, and he mentioned how the opinions about Apple have been more polarized than usual in the last couple […]

One of the devices I’ve been most curious about the past couple of months, particularly in late 2009, is Nokia’s Maemo 5 powered N900. After the slightly disappointing Symbian^1, which failed to bring something new to the table, the Linux based, open-source OS Maemo 5, that features tight Internet integration, seemed like the perfect way […]

9 Reasons Why I Will Never Buy a Product From Apple

In my early teens around the mid-90s, when I was a gamer and aspiring programmer, there was a good-natured schism of sorts between PC (‘IBM PC compatibles’) users and Mac users. It was like the computer nerds were split into two camps. We didn’t actually know much about Macintoshes, but somehow we knew we didn’t […]

I’m a self-confessed smartphone geek, and I’m almost embarrassed to admit that I’ve actually started fantasizing about my next device. The superphone of my dreams hasn’t been announced yet, since no handset that is currently on the market have all the features I want. A year ago, I wrote a post called Next Phone Dream […]

After a period of rare updates, I am happy to announce that GeekedOut.se has evolved into www.TechCredo.com. The new site has the same content but a brand new look, plenty of extra features, improved navigation and since it’s powered by WordPress – maintenance and adding new content will be much easier than before. www.TechCredo.com will […] 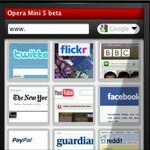 You most certainly already know about the beta version of Opera Mini that was released earlier this week. Opera Mini has been one of my favorite cellphone browsers for years, I even prefer it to its big brother: Opera Mobile. Mainly because it’s so quick (pages are compressed before being directed to your phone) and […]

This is old news by now, but I wanted to share it with you anyway – it’s multi-touch on Windows 7! I got pretty geeked out when I first saw this. I wouldn’t mind having a laptop like that…

I came across a rather interesting article at AllAboutSymbian.com about the current megapixel race on cell-phone cameras; here it is for those who want to read it.

What would your dream device look like? In March 2009, I mused over the hypothetical specifications for my next handset. This is what I came up with. Dream Specs – March 2009 OS: Android or Symbian S60 5th Edition. Since I set my mind on Android over a year ago now, and the fact that […]

TechCredo’s Phones of the Past

I usually find it quite uninteresting when people list their past phones on forums, but hey – this is my website and I get to be as boring and tedious as I like! If nothing else, this look down memory lane will show how fast the technology has advanced in just a few years. Video: […]

Greetings humans and humanoids, and welcome to www.TechCredo.com – the place where I get to live out my gadgetry nerdiness and indulge myself in the world of technology. This will not be a cell-phone blog per se, as there are already so many prominent ones available – but more of a resource, a clear overview […]