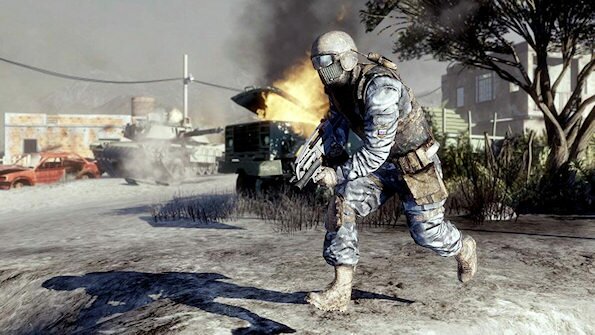 Imagine you’re sitting in the corner of a small room in an abandoned cottage in the outskirts of a desert village. You have taken shelter in an attempt to recuperate, catch your breath. Just moments ago, you ran away in desperation because you were about to die. Bullets came from nowhere — you miraculously managed to dodge most of them. The cabin is partly demolished, probably from a recent airstrike; one of the walls has a big crack in it. A hostile squadron of four men wants to kill you, and they will likely succeed. You think they know where you’re hiding.

There’s blood running down from a wound in your head, blurring your vision and you can hardly hear anything because of the deafening grenade blasts earlier, except for a high-pitched tinnitus tone and the sound of your own heart. You reload your reliable M1911 pistol and prepare to fight. You have no idea where the rest of your troop is – you assume they’re dead. In all probability, you won’t survive this either.

You’re starting to get your hearing back, and suddenly perceive the sound of steps outside the cottage. Your heart beats faster and you feel a slight rush of adrenaline. This is it. To avoid being seen through a window, you crouch and move slowly with your back against the wall and point your gun in the direction you think your enemies will appear. Two men rush in: turmoil, violence and confusion ensue.

You somehow manage to shoot one of them straight in the head, and there’s a distinct, hollow noise from the bullet penetrating his helmet: like the sound of shooting on a tin can with a BB gun. He moans, and falls to the floor with a twisting motion. His ally hits you a couple of times with some type of rifle, but obviously in no vital body parts because you’re still standing. 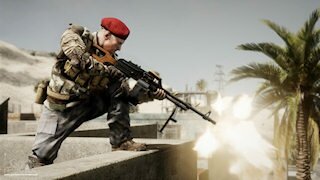 For a few seconds, there’s a strange, sadistic dance to the beat of gunshots. You run out of bullets, but there’s no time to reload. You draw your blade, jump and throw yourself towards your foe and force your knife into his throat. As you’re about to get the hell out of there, you discover another adversary who’s luring outside, and he’s trying to kill you through a small shutter.

You leap away from the line of fire, and pull out your long-distance rifle that’s quite useless in close combat, but you have no choice. From the hip, by instinct, seemingly with a cat’s reflexes and to your own pleasant surprise, you shoot him where it hurts the most and the damage is devastating.

Just as you put in a fresh clip in your M1911 pistol as a precaution, you discover a final enemy that has almost finished climbing down into the room from the roof through a ladder. You feel a sting of anger and despair. But chance interferes: an engineer from a third patrol driving a tank must’ve noticed the turmoil, because just when you think you’re history, an entire wall is knocked out by a cannon blast. There’s dust, smoke and debris everywhere. That tank was the catcher in your rye, because it gave you time to reload. While running out through the demolished wall, you shoot, shoot and keep firing until all movement ceases and your clip is empty.

Once more, you have blood in your eyes. You limp away, leaving the cottage behind you, and try to avoid being seen by walking in the shadows and hiding in the occasional vegetation. The desert winds blow sand in your face, and you end up alive behind a group of rocks. Luckily, your squadron’s medic shows up and gives you treatment. You’re feeling better again.

Sorry for the short story introduction, but this is just one example of a virtually endless number of enthralling action scenarios you get to experience when playing Bad Company 2’s Squad Deathmatch mode against online opponents. The premise is simple: four competing squads with four people in each group fight in various environments, and the first squad that reaches the required amount of kills (usually 50) wins.

For me at least, I don’t get to just play a game, I get to have experiences through a virtual world. I get a little taste of the real thing by experiencing simulations of situations that I wouldn’t want to have, nor could have, in the real world. That can be priceless. Hook up a game like this into one of the next-gen virtual reality setups, and it will blow minds. Then, in a number of years, connect a similar but more advanced 3D game to your nervous system so you can actually feel the pain, the wind in your face and the weight of what you’re holding, and you have the first steps towards a Matrix. It’s not an unlikely scenario.

A childhood friend of mine, who actually is a programmer at Dice, the company behind the game, criticized Bad Company 2’s multiplayer modes and claimed that you needed to know all the maps by heart to avoid getting constantly shot. I definitely disagree, although being familiar with a map is of course beneficial.

It will however take a few days of playing before you get good at it and figure out your own style, approach and your weapon of choice. I bought

the game a week and a half ago, and while I didn’t stand the slightest chance in the beginning, I’m now a rank 23 Warrant Officer, and it’s not uncommon that I have 15-30 kills per round in Squad Deathmatches if I focus (first squad to hit 50 frags wins) and a third as many deaths, and that’s when running around and being aggressive and confrontational. I love close-combat, when it’s who reacts faster and better that matters. But when you move, you need to move strategically: stay out of big open areas to avoid being spotted, never stand still too long, keep an eye out for enemies and use the element of surprise to your advantage. Needless to say, the better you get at BC2 Squad Deathmatch, the more fun it is. In a game like this, it’s of course more fun shooting people all the time than getting shot all the time, and you will likely not get hooked until the first time you do stuff worthy of an übermenschen action hero. After each round, you get various badges and achievement awards depending on how well you’ve played (as shown in the screen shots), and that’s a nice element of the game.

I have a few objections, but they are very minor. I only care for the Squad Deathmatch mode, however, since I haven’t enjoyed the other modes so far (I think they’re too busy and hectic). A few Squad Deathmatch maps are a bit too big, so you occasionally run around for minutes without finding a single enemy. There’s one tank on each map, and depending on who is behind the wheels, it can be a source of irritation as well because of the noise if it fires constantly.

Overall, the game features superb graphics, and the gameplay is surprisingly intense. The physics engine is excellent as well: nearly everything can be destroyed, and entire buildings can collapse. You get to play four different classes in the multiplayer mode, each with its own unique set of weapons and gadgets: Assault, Engineer, Medic and Recon. There is also a role-playing element of sorts, since you get a higher rank and unlock new items the more points you gather through combat experience.

However, the real kick with Squad Deathmatch for me personally is that you get to experience action sequences that James Cameron himself couldn’t have dreamed up. In fact, those who want inspiration for action scenes in films should play this game. And if you’re good at it, you occasionally get to be the on-screen personas of Arnold Schwarzenegger, Sylvester Stallone, Chuck Norris, Steven Seagal, and Bruce Willis all in one. I’m not kidding: there are often completely insane amounts of action, and you get to do ridiculously awesome stuff. And better still, sometimes you feel like the Man With No Name gunslinger from the legendary 60s Sergio Leone spaghetti westerns. No wonder the game is so addictive.