Tutorial: How to Hide Sound Files from Symbian’s Music Player 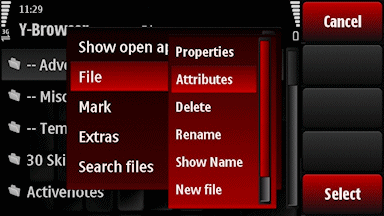 I have quite a lot of ringtones and notification sounds on my phone, and also sound files from the adventure games that I play with ScummVM – all of which I do not want to show up in Symbian’s native music player on my Nokia N97. These miscellaneous tracks are not a problem when you listen to playlists, or a specific album, artist or genre, but when you use the shuffle feature, you don’t want to suddenly hear a loud alarm, or a screech from The Dig, that ruin your groove. Ideally, we would be able to set the Symbian music player to only include MP3 files from a specific location, but since Nokia apparently thought that was a redundant setting, we have to do it the hard way.

The trick is to add the System attribute to the folders that contain the sound files you don’t want in the music player. They will then be ignored by the player. Unfortunately, they will be ignored by all other applications as well. Because of this, you have to mark the folders with the System flag, update your music library, and then remove the System flag again if you want those sounds to be available for other applications.

How to Remove Sounds from the Symbian Music Player