Old-School Games on the Nokia N97 via TV-Out 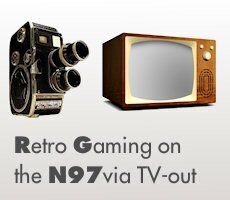 Last week, I decided to give my Nokia N97’s TV-out feature a try and see what it would look like when I played some retro games on the television. I was pretty geeked out when I realized how well it worked: the games looked great, and it really enhanced the gameplay. It was almost the same experience as playing the actual video game consoles.

When you’re on the road with a Nokia N97, it’s like having a versatile, retro gaming device with you that fits in your pocket, that you simply can plug into any television: sort of like a game controller with all the games built-in.

I tried out Quake and Quake 2, Alien Hominid with the Game Boy Advance emulator vBag and Super Mario Brothers Deluxe with vBoy (it was really slow for some reason). I topped the gaming session off with Sonic the Hedgehog and some good, old fashioned street fighting in the Sega Genesis game Streets of Rage 2. Finally I played a couple of classic Lucas Arts PC DOS adventure games from the mid-90s: Sam & Max and Full Throttle (with the help of ScummVM). Watch the video below to see what it looked like.