In a series of articles, I want to illustrate what a great portable gaming device the Nokia N97 can be, even though it has a comparatively slow processor, only 128MB of RAM and lacks hardware accelerated 3D graphics. Nevermind all those mediocre JAVA games, or the ones offered in the OVI Store: you’ll get the true gaming kicks on Symbian^1 by going retro and looking back into the glorious world of the 8 and 16-bit games that was carefully crafted by console giants like Sega and Nintendo. Nintendo emulation is already covered, and now it’s time to put Sega in the Symbian^1 limelight. 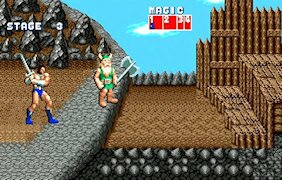 On my Nokia N73, I loved the Sega Master System / Game Gear emulator MasterGear. I’ve been in contact with Marat Fayzullin, the developer of the emulator, on several occasions. And even though he says he’s working on a release of MasterGear that’s compatible with 5th Edition devices, it has yet to see the light of day. Fortunately, another Sega emulator called PicoDrive works great! It may not be as advanced as MasterGear, but it has the benefit of actually working. PicoDrive supports Sega Mega Drive/Genesis games, but it doesn’t have Game Gear support. Here’s how you get it started on the Nokia N97, N97 Mini or any other Symbian^1 device with a hardware QWERTY keyboard. Unlike Vampent’s Nintendo emulators, it’s much less ticklish to get PicoDrive running. Next up in the series of gaming tutorials at www.TechCredo.com, is trying to write a fail-safe guide to playing Quake on Symbian^1.

Since PicoDrive’s menu options are accessed by pressing the OK button, you can’t use the menus on devices that don’t have this particular key, without using a program like Virtual Keyboard or Virtual Key. The workarounds are quite smooth, but you need to be able to sign applications before they can be installed. This might scare some people off, but signing Symbian apps is easier than it might seem. And once you have your certificate (it’s free), it only takes a couple of seconds to sign applications. Getting your certificate is definitely worth the bother, since you from then on can use a whole range of unsigned Symbian software – not just Virtual Keyboard and Virtual Key. Here is an excellent guide to signing unsigned applications at Symbian-Guru.com. Thanks to Yap for helping me out with testing on the N97 Mini.

There are two methods of emulating the OK button, and the first one is probably the most convenient.