Browse: Home / Guides & Articles, WinMo / All That is Bad About Windows Mobile

All That is Bad About Windows Mobile

I got my first Windows Mobile device in early October 2008, when I bought the Sony Ericsson Xperia X1. I had in fact set my mind on a high-end Android or Symbian touchscreen phone, but no such options were available at the time.

Even though I had heard nothing but criticism about it, I was curious of WinMo, as I am of all mobile platforms I’m not familiar with yet. So I gave the Xperia the benefit of a doubt. I wasn’t sure what to expect, since my only previous impressions of the OS were through a couple of brief hands-on videos and a few articles and screen shots. My initial reaction to the Xperia and Windows Mobile was mixed. I was of course intrigued by my new acquaintance, but it didn’t take too long before I thought “what the heck is this abomination?” I often got rather annoyed and provoked by the way WinMo acted. However, I also soon realized that it can be a powerful, versatile and highly customizable platform that is suitable for tweaking and experimentation. The way it can be customized is Windows Mobile’s only real strength in my opinion, and in a way also a weakness.

The Xperia X1 is a fairly alright phone from the start, and it can be pretty good – if you put some time and effort into it. It’s a rather schizophrenic device; you can use one of the many panels (something that is rare among Xperia owners), SPB Mobile Shell, Touchflo 3D, PointUI Home 2 or any of the other wealth of UIs available. If I had gotten paid for the hours I spent trying to turn my Windows Mobile device into the phone I hoped it would be out of the box, not only would the phone have been free of charge but I would have gotten the price of the phone in payment. I actually think I have spent more time trying to make the X1 behave the way I want to, than I have enjoying its features. Sure, tweaking can be a treat and it’s fun to dig deeper and learn about an OS, but only to a certain degree and to make something good even better – definitely not to correct flaws that shouldn’t have been there in the first place.

When I got Nokia’s first Symbian touchscreen device in March; the 5800 (featured in The Dark Knight), it felt like I had a proper phone again. Everything just worked, it was quick, fairly intuitive, feature-packed and there was no need for tweaking. But when I switched back to the Xperia again for a while, flashed a nice ROM with Touchflo 3D and installed all of my favorite software, the Nokia 5800 almost felt like a toy in comparison – the X1 appeared more powerful and grown up. So after all, Windows Mobile has its benefits – but it isn’t for everyone, that’s for sure.

I still have plenty of objections, though, which are listed below. Even though a few of them sort of fall under the same category, I have chosen to divide them. Remember that I’m talking about the native Windows Mobile 6.1 here, not interfaces put on top of it. This is a look at the downsides of Microsoft’s mobile OS.

It’s Unintuitive
The interface is unintuitive, one might say even provokingly dumb at times. Windows Mobile can be a powerful and versatile OS, but when it comes to innovation, interfaces and fresh ideas, Microsoft is falling behind the competition (Android, the iPhone, Maemo and even Symbian). That might all change with WinMo 7, though, and they’re taking a step in the right direction with version 6.5 – but it should have been released a long time ago and not in late 2009. It is telling that the greatest progress Windows Mobile has made in the interface department is not Microsoft’s own doing, but HTC’s with their TouchFLO3D that they use to disguise WinMo – more and more for each new incarnation of the UI. 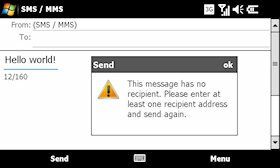 Here are a few examples that illustrate my point. When you try to send a text message and forget to add a recipient, Windows Mobile displays an intrusive box telling you this, that you have to tap to get rid of, instead of simply taking you directly to the list of available contacts. Overall, WinMo usually adds 1-2 more taps than is necessary because of the inferior interface design (anyone fond of notification pop-ups?), and it gets annoying after a while. To me, that’s just bad coding.

Other examples of this trend; when you reach the end of a list and still scroll down, you should end up back at the start. Likewise, when you scroll back at the start of a list, you should quickly be directed to the end. When you add a subject to a message, it should automatically be changed to an MMS, when you tap on a input box that only accepts numbers, the on-screen keyboard should recognize that, and when you click on a date in a text message or email, the calender ought to automatically be displayed with that date selected, and so forth, et cetera, et cetera…

It’s Cluttered and Overly Complicated
As mentioned earlier, actions that should only take one tap to perform usually involve a couple of redundant extra steps, just because the developers haven’t managed to come up with the simplest, quickest and most practical solution. Overall, Microsoft has not taken the user-friendly route; WinMo is on occasion downright user-hostile. Perhaps they hold a secret grudge against their customers? This also falls under the unintuitive category above. I have no real issue with WinMo being complicated, but I know people that just don’t have a clue what to do with it. When it comes to the interface, it can be quite cluttered up at times, with lots of tiny drop down-lists, arrow buttons, sub-menus and redundant objects.

It Doesn’t Look or Feel Like a Modern Cell-phone
The general feel and design of WinMo 6.1 is more of a mobile running some weird port of Windows 3.1 from 1992. The UI is comparatively ugly and unpolished. The calendar is an epic fail: one of the most hideous and impractical I have ever seen on a phone (some people love it, though). 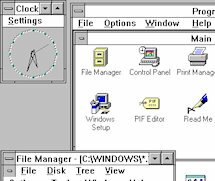 Not to mention what the interface designers were thinking when they came up with that brilliant Alarm Screen concept.

It seems as if all phone manufacturers using Windows Mobile on a device try to do a total makeover and cover the OS up. HTC has probably been most successful at this task. There are of course several reasons to why this is being done: the system allows it, they want to differentiate their product, add value to it and make it stand out among the competition. But the foremost explanation to why there are so many user-interfaces available for WinMo, is probably because there’s an urgent need for it – since the native one sucks. How can a high-end smartphone in late 2008 look like this?

Update: I couldn’t resist including this telling remark from Joshua Topolsky’s HTC HD2 review: “The experience was a quick and painful reminder that no matter how pretty the window dressing is here, HTC has staged its fashion show in a building that should be scheduled for demolition.”

For a Touchscreen OS, It’s surprisingly Hard to Touch Things

It’s clearly not intended to be used without a stylus – and styluses are obsolete, even in 2008 when version 6.1 was released. What makes this drawback even more peculiar is the fact that there’s absolutely no reason for that type of UI design – no advantage of the screen estate is being taken; objects in the OS are still tiny and have an unpolished, retro look even when there’s plenty of space left over.

If you’re making an OS for touchscreen phones, why in the world would you make everything so difficult to touch?

It’s Bloated and Slow
Windows Mobile has unnecessary elements that rarely or never are being used, and it uses more system resources than is justified. I personally enjoy that there are so many settings, but they certainly are an example of what would benefit of being more streamlined.

I have lost count on how many times the system has frozen (the equivalent of Win 98’s old
“blue screen of death“) and I’ve been forced to remove the battery in order to reboot. There is also really no excuse for the OS to be so slow at times. At one point, it took 2.5 minutes to boot my Xperia! I had messed quite a lot with the system and had tons of applications installed, but still – 150 seconds? In comparison, tasks performed on my Xperia X1 sporting 256MB of RAM and a 528 MHz processor, are usually performed faster on my Nokia Tube (128MB RAM, 369 MHz CPU), even though it ought to be slower due to its inferior hardware power.

It’s Schizophrenic
A system that fairly easily can be tampered with and changed into anything is of course versatile and powerful – a chameleon, you can make your phone your very own and turn it into something unique. But in a way such a system also lacks its own identity. I stopped using the Xperia when I couldn’t decide which one of the many user-interfaces I should settle for, or which one of the dozens and dozens of ROMs I should run. Whichever setup I used at the moment, it didn’t feel like the phone’s own: just something I had put on there that worked so-so. The many different ways of using a Windows Mobile device can be overwhelming, and which one of them is ‘Windows Mobile’?

Obsolete Apps
There is a huge number of software titles available for Windows Mobile, many of them are excellent and that’s great. There is also a vast amount of small, independent WinMo developers out there that make the platform bloom, since if you know your way around C – it’s easy to code for Windows Mobile. But a lot of applications have an obsolete design and are often plagued by the same issues as Windows Mobile in general. And Microsoft’s equivalent of Apple’s App Store, the Windows Marketplace, is still not up and running.

No Support For Drag & Drop Operations
Even after eight years of development, you still can’t drag and drop in Windows Mobile. You ought to be able to rearrange the start menu to your liking without having to go through the hassle of doing it manually with the File Explorer through cut & paste commands, and it would be so much easier to move files in the Explorer with drag & drop. On the brightside, at least there are longpress actions.

It Lacks Basic Phone Functionality
There’s no support for phone profiles (the sound level system is dreadful), and WinMo doesn’t come with a timer or a stop watch. There are also minor issues that can prove annoying in the long run, like that the list of installed applications doesn’t get sorted by date or name (it’s just a random mess), the Symbol Screen doesn’t remember the last symbol you selected and the system still only supports 128 000 colour displays (come on, that’s ridicoulus). The native on-screen keyboard must be the worst one ever designed, a joke – but not ha-ha funny.

That’s pretty much it. I’m done. Have I been overly critical? Perhaps, but I think these are issues that many Windows Mobile users will agree upon. Contrary to what you might think after this battering, I do like both WinMo and my Xperia (it’s a love-hate thing). I will continue to follow the development on the WinMo front closely and I’m curious of what Microsoft will do with their mobile platform in the future.

Do you agree or disagree with this article? Leave a comment below.