During its initial year, the Android platform had some catching up to do when it came to mobile gaming. There were undeniably plenty of fun, clever and addictive games out there, but in general they didn’t feature any advanced graphics – not least because the available Android devices at the time lacked the hardware to handle it. But all that began to change with the release of the Motorola Droid back in October 2009. The Droid packs a PowerVR SGX 530 GPU that ensures some powerful graphical processing powers, and a few months later when the Nexus One arrived, along with all the other Android phones powered by a 1GHz Snapdragon processor, more and more titles arrived in 3-D that was on par with games released for the iPhone. Polarbit is currently one of the leading developers, and Gameloft launched a series of promising games in 3D not long ago. Even Google has quite recently started to put a lot of effort into making Android a great gaming platform: Android gamers have plenty to look forward to.

Here are four current Android games with excellent 3D graphics that are worth their price tag. They will most likely require second generation hardware (Motorola Droid, Nexus One, HTC Desire, Incredible, EVO 4G, Samsung Galaxy S, et cetera) to run smoothly, but a few of them might be playable on older Android devices as well. Want more 3D games for your good ol’ ‘droid? Check out the list of games and developers at the bottom of the post. 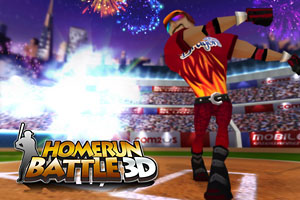 Homerun Battle 3D is an entertaining baseball game that can be quite difficult before you get a hang of it, but once you do – it’s addictive. The goal of the game? Hitting homeruns! There’s a multi-player option, as well as several different single player modes. 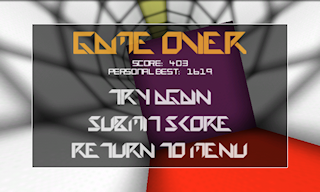 SpeedX is a quite original game that lets you fly through a tunnel full of obstacles, and it puts your reflexes to the test: you really need to focus and react quickly in order not to crash. The graphics have a retro vibe and the game looks great. You can imagine you’re Han Solo navigating through a meteor field, or totally get your geek on and close your eyes and “use the Force” and see how far you’ll get (you will crash and burn, I reckon). SpeedX can be addictive. 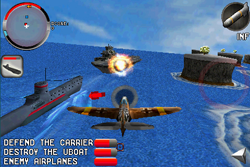 Armageddon Squadron is an impressive World War II era arcade flight simulator. The point of the game is to fly various planes and perform a variety of missions in different environments. These missions may entail bombing the heck out of facilities and convoys, protecting ground troops against enemy aircraft, and naturally dogfights with hostile planes.

You can choose to annihilate your adversaries with machine guns, bombs, rockets and torpedoes. Armageddon Squadron’s controls work really well: you maneuver the plane by tilting your phone, and you fire and switch between the various weapons by pressing virtual buttons on the screen. The game has appealing 3D graphics, of course, otherwise it wouldn’t be on this list, but it’s mainly praised for its varied, and at times rather challenging, gameplay. Watch Armageddon Squadron in action below, in what must be one of the worst official promo videos ever made. 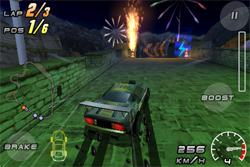 Even when I was a quite hardcore computer gamer in the mid-90s, I didn’t enjoy racing games that much. Sure, there were some exceptions, such as Destruction Derby, Need For Speed, Ignition and a few others. But I was mainly into first person shooters, adventure games, real-time strategy and role-playing games. I’m also a QWERTY, physical buttons kind of guy, and I’ve been a bit skeptical of games that are solely controlled by the accelerometer and/or touchscreen. To control a game by simply tilting the screen seemed too basic for me. That’s why I was surprised by the kick I got out of Raging Thunder 2! 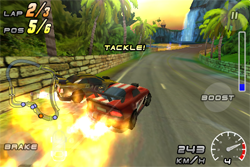 The game features superb graphics (Polarbit calls it “console quality”) and there are tons of things going on visually all the time. You can capture items along each stage, such as speed boosts and cash. When you’re in the career mode, you can use the money you’ve earned to enhance the various aspects of your car by buying new parts for it, or you can purchase another vehicle altogether.

Raging Thunder 2 basically has all the different elements of a classic racing game. There’s multi-player support that lets you challenge Internet opponents, as well as other players locally (even cross-platform). When you play on your own, you can choose between five different game modes: time attack, survival, career, instant race and single race. Overall, both the music and the sound effects have a high standard. What I like most about Raging Thunder 2, though, and the main reason I keep playing it, is that Polarbit actually has managed to create a sense of speed. The accelerometer steering is superb as well, especially if you set the Tilt Sensitivity option to the maximum value. All in all, Raging Thunder 2 is a really entertaining title that I think is a worthy representative of Android gaming at the moment. Check out the video for an official demo, but the video doesn’t quite do the game justice since Raging Thunder 2 doesn’t look pixelated at all on my HTC Desire.