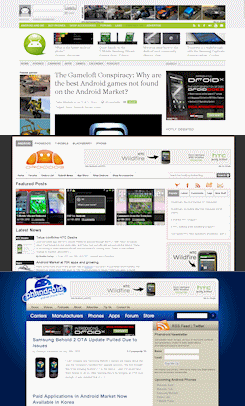 After an intriguing Wired article in early 2008, I think it’s safe to say that I got fairly obsessed with Android: Google’s then upcoming open-source mobile OS. I felt that Android was going to be the world’s greatest smartphone platform, the idea of it fascinated me immensely and I read news about the development of the new OS daily. Back then, Android Guys and Phandroid were the best blogs for Android related news, and one of the first posts on this site was called Android Resources that listed the top sites for getting Android information. Android Guys and Phandroid are still two major Android blogs, but as more people have had their eyes opened to Google’s platform, more quality blogs covering it have appeared.

This post lists what I believe to be the top 10 Android blogs at the time of writing. They all cover Android apps, games, handsets, rumors and basically everything related to the OS. By following these blogs, you won’t miss a thing in the world of Android, and I have at least half of them in my own RSS feed. However, these are all American websites – in case you live outside the US, a regional blog about Android might prove a great addition.

The Top 10 Android Blogs
Android and Me

It took a while for me to fully appreciate Android and Me, but it grew on me and now it’s probably my favorite Android blog. The site has a professional (albeit slightly crowded) design, especially since the overhaul in beginning of the summer, and the content is usually varied and of fine quality. Among else, Android and Me highlights apps, games, new phones, rumors and hands-on videos. There are generally about 5-10 new posts daily during weekdays.

Another solid and well-regarded Android blog, who claims to be the first independent website dedicated to Android news. Regardless of what you may think of the occasional use of CAPS, and the slightly arrogant tone in some of the posts, Phandroid is definitely one of the most professional and reliable Android blogs out there, with an expanding network of sites including AndroidForums and AndroidApplications. I also enjoy Phandroid’s handy Phones section, that tries to list all the upcoming and currently available Android devices.

Yep, you guessed it: another quality blog about Android that is worth following. Androinica, part of the YulMedia Blog Network, is dedicated to covering Android app reviews, news, phones, tutorials and tips. One of my personal favorites. Update: Where I’m now an editor, as it happens.

DroidDog is PhoneDog.com‘s site that is solely dedicated to Android, with five editors that cover various areas of Google’s OS. Most Android blogs mainly provide news for regular users, but one thing I like about DroidDog is that they write for power users, modders and hackers as well. I also enjoy the quite clean and accessible no-frills design of the site.

AndroidCentral is the latest addition to the Smartphone Experts family of sites, alongside PreCentral.net, CrackBerry.com et cetera. It’s a frequently updated blog about all things Android; it’s not uncommon with 15 new posts a day.

An excellent source for news and rumors about you-know-what. One of the bigger and better Android sites, online since late 2007, even though I feel they’ve been falling behind a bit lately.

Droid Life may still be a comparatively small fish in the sea of Android, but this blog with focus on the Droid brand of Android devices is actually quite good.

The heart of this site is the community forum, which currently has over 80 000 members, that discuss Android in all ways possible. Android Community‘s main page also offers a blog, with all the typical sort of news.

This blog has also been around since my interest for Android started, and I’ve visited it occasionally. It’s good, but for some reason (the site layout?) it appears a wee bit less professional than some of the other Android blogs on this list.

AndroidAuthority.com is operated as part of the MobileBurn.com network of sites, and while I may not be too fond of the site’s design, I think it deserves to be on this list.

And then of course there is the cell-phone news giant Engadget Mobile, which even though it naturally does not cover Android exclusively, still is a great source for major Android news.