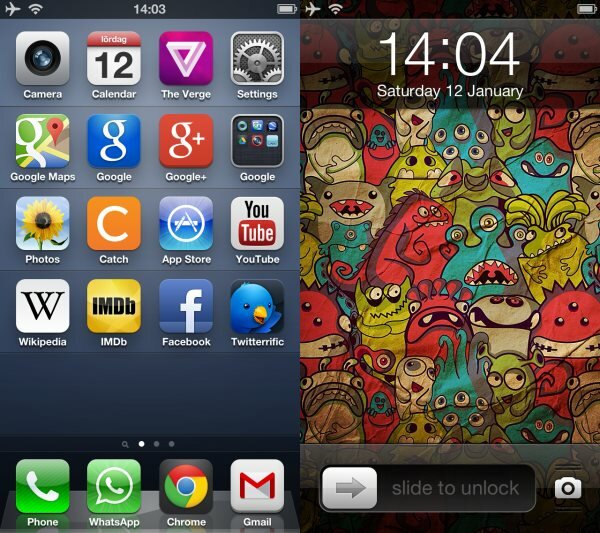 Considering that TechCredo has been pretty vocal about Apple and its methods and products in the past, I feel that a minor disclaimer is in order before presenting this collection of top iPhone 5 wallpapers (640 x 1136 pixel resolution). I write about Android for a living (not on TechCredo, of course) and my interest in Google’s platform started five years ago.

I’m curious of all mobile operating systems – not just Android – and last fall I wanted to completely explore a new platform and its apps and ecosystem. I purchased the Windows Phone 8 device HTC 8X as soon as it was released, hoping that Microsoft’s mobile OS had matured enough to be a viable option. Alas, it had not. I love the minimalist design and typography, but the system is way too limited compared to Android.

The worst part, though, is that Windows Phone basically has no ecosystem and no Google support. WP8 lacked nearly all my favorite apps and the few titles it did have, such as the official IMDb client, were horrible. I felt bad for Windows Phone users not knowing what they were missing out on and I returned the HTC 8X within 24 hours.

Rejecting Windows Phone 8 didn’t leave me much option if I wanted to explore another mobile ecosystem: I had to join the Dark Side and get an iOS device. So against my better judgment, I bought an iPhone 5. Apple’s iOS is of course a polished system (although I find Apple’s design language pretty tacky) and all the high quality apps make it a far better OS than Windows Phone 8.

However, everything is very locked down and the system basically has no customization options at all. I get claustrophobic when using iOS from time to time since the system hardly offers any communication and sharing possibilities between apps. The fact that Apple calls iOS “the most advanced mobile operating system in the world” is a joke. Android is so far ahead you can’t even see iOS in the rear mirror.

Still, I have to admit that I do enjoy several aspects of the iPhone 5. The build quality is excellent, iOS is fast and easy to use but foremost the platform has a vast number of great apps. The most important part, however, is that Google is supporting iOS by releasing quality apps for all its major services. Google does not support Windows Phone and has no plans to release apps for Microsoft’s OS – that alone is enough for me to not use WP.

Enough of this rambling – here’s a great collection of 102 quality iPhone 5 wallpapers. They all have the same resolution as the iPhone 5: 640 x 1136 pixels. All of the backgrounds are more or less stylish, minimalist, artsy and well… quirky. Hope you’ll enjoy them!