One of the devices I’ve been most curious about the past couple of months, particularly in late 2009, is Nokia’s Maemo 5 powered N900. After the slightly disappointing Symbian^1, which failed to bring something new to the table, the Linux based, open-source OS Maemo 5, that features tight Internet integration, seemed like the perfect way for Nokia to redeem themselves. To me, this device looked like Nokia’s answer to Android, and such a reply could only be a good thing.

That’s why I was really excited when I got a Nokia N900 delivered to my doorstep today, to test for a couple of weeks, courtesy of WOMWorld/Nokia.

At the Mobile World Congress in February earlier this year, it was announced that Maemo would be merging with Moblin to create the MeeGo platform. Some Maemo enthusiasts were indignant at this announcement, and feared that Nokia would leave the N900 in limbo, but that does fortunately not seem to be the case. In the best of all worlds, the N900 would even eventually get an official MeeGo update, although that remains to be seen.

I know that Maemo has a thriving community of developers, hackers and modders, and that’s one of the reasons why the N900 appealed to me in the first place. To survey what a platform has to offer when it comes to software, ports of other operating systems, emulation, tweaks, customization and modifications takes time, effort and an active interest, and I haven’t been able to enjoy these aspects of the N900 yet. This post should have been published about five months ago in order to have any news value, but I still want to share my initial thoughts on the device. These are my first impressions of the N900, after having played around with it for a couple of hours.

The Web Browser is Awesome 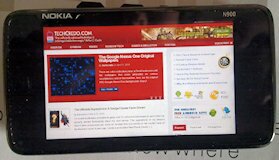 It has managed to display everything I’ve thrown at it so far, and it has the smoothest playback of flash videos I’ve ever seen on a phone. The browser feels really solid, first-rate and it’s good to walk around knowing that you literally have the entire web in your pocket, with no restrictions. It can even properly display ThickBox type pop-ups, which I know many mobile browsers fail to do. The method of zooming in and out using a circular motion, as shown in this video, works surprisingly well.

In other words, the N900’s Internet experience did actually live up to its favorable reputation. At acid3.acidtests.org, you can test how accurate a browser is. In that test, the Nokia N900’s browser scored 93/100, which is a good result for a browser on a phone. In comparison, Firefox for Windows gets 94/100, Internet Explorer 8 fails the test completely with merely 20/100, and Opera, Google Chrome and Safari for Windows all ace the test with 100/100. The native Symbian^1 browser fails the test as well (47/100), and Opera 10 for Symbian scores an impressive 100/100.

The only downsides of the N900’s browser that I’ve noticed so far, is that sites that have been optimized for touchscreen devices, like Facebook Touch and Google Reader, don’t work as well as on most other smartphones, since the N900 displays them as a desktop browser would. I love when my handsets automatically adjust the rows of text to fit the screen at each zoom level when I’m on the web, so I never have to do any frustrating side-scrolling, but unfortunately the N900’s browser doesn’t have such a feature.

Update: The more I use the browser on the N900, sadly, the less I enjoy it. Having to side-scroll to read text is indeed a pain in the ass, and to my knowledge, the browser doesn’t support copy & paste. It displays some elements incorrectly on a few websites that I’ve visited, and a couple of menus in web apps have been cut in half. If you change the default font size to anything other than the Normal setting, pages get messed up, but it has that fault in common with most mobile browsers. A command for easily sharing links is another thing that I miss. I still think it’s a powerful browser, it just isn’t practical. The native Android browser beats it, in my book, especially in terms of how pleasant and fun it is to use. 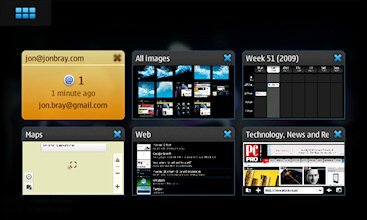 The N900 has 256MB of RAM, and a 768MB swap space for a total of 1GB of virtual memory. That’s a big playground for running applications simultaneously, and while I haven’t run more than 3-5 apps concurrently yet, I’m pretty positive you should be able to reach the Samsung i8910 HD’s heights of multi-tasking, if you were so inclined.

I especially enjoy how the N900 lets you switch between active applications, in a way that is similar to the Palm Pre’s cards, as demonstrated in this video.

It Has a Quick, Stylish, Logical and Easy-to-Use UI 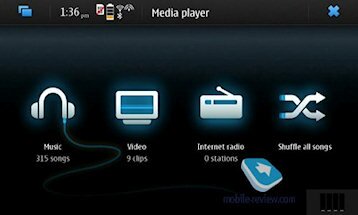 There was basically no learning curve at all when I picked up the N900, and I could enjoy all its features right away without having to figure anything out first. I intuitively knew how to use it, and in that regard, the N900 with Maemo 5 is similar to Android devices. Another likeness to Android is the Nokia N900’s multiple homescreens, four of them to be exact, upon which you can place bookmarks, wallpapers, widgets and shortcuts to applications and contacts.

I haven’t noticed any delays, and so far the system has been very quick, and on top of that – visually appealing. The native email client seems practical, and text messages are threaded the way they should be. One of the things I like most about the user-interface, is the menu navigation: to go back a step in the menus, you simply tap on an unoccupied area of the screen. It’s incredibly simple and convenient.

The N900 is a Connected Device

When you browse your contacts, you can see who currently is online (depending on which services you have added), and it’s easy to start a chat or send an email or a text message. It also appears to be quick and simple to share images and other files via Bluetooth, email, or through various services such as Flickr and Facebook. On the homescreens, you can have widgets that get updates from the Internet, and the device comes with an excellent online radio player. On top of that, you have the very capable web browser, and all this make the N900 a fine choice for those who rely a lot on the Internet. However, I had some difficulties setting up Google Sync via Mail for Exchange: when I tried to synchronize emails and the calender, I got a server error, and I could only sync my contacts, but I’m not entirely sure what caused this. 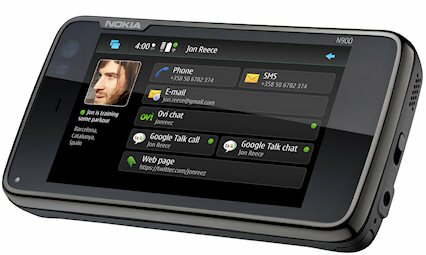 No Portrait Mode is Indeed a Disadvantage

I’ve read that portrait mode anywhere you want to, is on the top of Nokia N900 owner’s wish list, and I can definitely see why. The phone is almost impossible to operate with one hand, and I think that’s a big drawback. I can’t think of one reason for not supporting portrait mode everywhere in the UI, and while I’m not that up-to-date with what’s happening on the Maemo 5 front, I guess portrait mode is coming sooner or later. I have also heard that there’s some (secret) setting that activates it in the browser, for example, but I’m not certain how, or if, it can done. To not be able to freely change the orientation of the screen, is one of the reasons why I would be hesitant to get a Nokia N900 myself, in spite of all its strengths. That is doesn’t have access to the same number of great apps as Android, and that Maemo more or less is abandoned, also make me think twice.

The N900 Has Impressive Graphics Capabilities 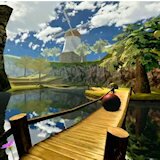 When I’ve seen Nokia N900 videos of the 3D game Bounce Evolution (I loved the first version of that game on my Nokia 5100), I have been pretty impressed by it. The N900 has a PowerVR SGX 530 GPU which supports OpenGL ES 2.0, and is capable of up to 14 MPolys/s. And while it may not trump recent high-end Android devices or the iPhone 3GS when it comes to 3D graphics, the N900 can certainly hold its own, and it’s obviously capable of some quite advanced and realistic animations.

Full QWERTY keyboards on phones always take some time to get used to, whether they are of the on-screen or hardware type, but the three-row hardware QWERTY on the Nokia N900 is below par in my opinion. I just don’t like it – it’s too small and I don’t like the feel of the buttons, even though I probably would enjoy it more after continued use.

The Nokia N900 is a heavy device: at 181 grams (0.40 lb), it’s heavier than any of the phones I’ve ever had – it’s even heavier than my Nokia 5110 (170g) from 1998. Surprisingly, that doesn’t bother me at all. On the contrary, the N900 feels really good to hold, and the weight makes it feel solid and robust. Overall, I get the impression that the build quality of the device is good. The fact that the N900 has a resistive touchscreen and not a capacitive one, will probably scare some people off, but as far as resistive touchscreens are concerned, the N900’s is quite responsive.

I copied a couple of large Div-X files to the mass storage, and the N900 could play them straight away with an excellent frame rate. Kudos. It even has a kickstand, so you can conveniently watch movies and videos.

Copying files to the N900’s mass storage was a really slow process, perhaps due to the fact that Windows for some reason complained that I have a slow USB port (I don’t). And I haven’t been able to choose from all available applications when adding shortcuts to the homescreen, simple because the UI refuses to list them. As I mentioned earlier, I also had some difficulties setting up Google Sync. Other than that, everything has worked like a charm.

As you probably can tell by my first impressions, I just about like the N900 as much now as I did before I had actually used one myself. I haven’t had a chance to properly evaluate the camera or the GPS yet, but as far as I can tell, they are both fine. But would I buy the device? I’m too hooked on Android for that, even though I would love to have a N900, because it’s certainly one powerful handset, and the web browsing that it offers is superb. I wouldn’t hesitate to recommend it to certain people, but it isn’t for everyone. I consider the N900 to be the best Nokia phone out there at the moment – it’s definitely their flagship, at least until that rumored N8-00 hit the streets. If you want to know what the N900 looks like in action, check out the videos below.